An ambitious, sociopathic young man who attached himself to the obviously brilliant and Idealistic but rather naiive Nicodemus Strauss and worked together with him in the founding of the artists and inventors colony of Blue Destiny . Lynzee Keerigan was also a member of this colony which later came to be Hell Colony

Gaia and Nicodemus were best friends until Gaia assasinated Nicodemus to cover up his own evil exparimentations with BlueStone , and framed one of the leaders of the Christian colony on blue destiny for the murder.

This happened shortly after the birth of Christian Strauss, and was the precipitating event in the exodus to a small frozen sisterplanet of Blue Destiny called Beta Blue. At this time they became known as Hell Colony.[Hell is frozen over and there are no Christians there]. Thus, Gaia is the founder of Hell Colony. Gaia then became a father figure and mentor for Nicodemus's son Christian, until Charistian's mother Shondra took Christian away to Earth. prior to that, Gaia implants in Christian's skull forms with BLueStone bases which he uses to control Christian.

Gaia uses the BlueStone from Christian's implants to gain control over Dr Sherman Hawthorn, who then builds a huge spacefaring, soul stealing monster called Leviathan . Gaia brings Leviathan to Hell colony and fuses himself with it and then consumes all the people of Hell colony and blue Destiny before he is driven away the the edge of the galaxy by Emily Hawthorn who can control Leviathan because it is also made partly of Living Stone , Having encourperated the body-but not the spirit- of Wikki , an Unchosen shapeshifter and Emily is aChosen One . 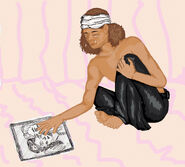 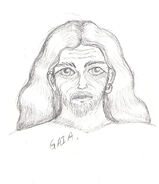