Freind/mentor of Matthias and Taz

protagonist of History of Paragangia

She painted a historical mural on the Paragangian Homestation 5 years after it's completion commissioned by Desmond Harris who was at the time Paragan, center of HomeStaion and Negotiater to Paragangia for Earth Aliance. They fell in love and jason was conceived during the time she was there to paint the mural. Considering Marriage and Having a child inspired Desmond to return to his LDS roots, however, he knew he was going to die around the time of the 5th anyversary of the station, and did not want Jason as a child to be burdened with the role of Paragan so he sent Gloria [pregnant with Jason] back to earth before the day of the ceremony.[in 22014 version, she has to leave because a problems with her pseudo implant, and she goes home to his family on Homeworld befoer returning to Earth] They pretended That Gloria was Jonathan's wife and that Jason was his child. Jasons' genetics were never recorded on the CommunityMind

Gloria Married Jonathan in Florida when Jason was 8 years old, for Jason's sake, but the marriage is not consumated because they both beleive she is still married to Desmond..

Gloria was a descendant of the sister of Jordan Kerrigan-Smith who founded the Retro-technology and Alien studies department where Jason works. thus she is Decended from Lynzee Kerrigan, who was one of the original members of Hell colony. 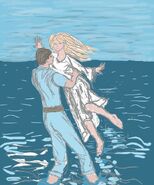 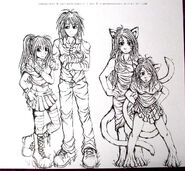 Gloria and Desmond by bloodroseangel

sketch of Gloria Scott on which art Jam pictures were referenced.