The secondary Protagonist of the Destiny of Dreams series. Jason Scott-Harris is considered to be the primary protagonist although there will be a few books in the series where Harris is primary.

Harris is a Paragangian Spacer , the youngest Son of Sen'tran Jenzar. He is a highly respected and well loved member of his ShipCommunity. Harris is the the navigator of the Marrion Jay . He is a very skilled Negotiator. He is able to get the Marrion Jay to where it is going faster than anyone else in the history of ShipCommunities. Because he is a navigator he has a central control implant which makes him capable of acting as Center, wither on the Marrion Jay or for the empire.

He is a strange childlike character. He loves pre-alliance Earth Movies, especially Star Wars. He has a small spherical floating robot he build for himself when he was about 12 which follows him around. Sylvia resembles one of the robot from Star Wars

In the first book of destiny of dreams [ The Son of Desmond Harris ] Harris Goes with Jason Scott-Harris to D'zeron. At first he refuses to go, but he is coerced to go by Quetz'l holding Jason captive on the dream plan and torturing him to get Harris to come to D'zeron.

In order to go because of the ban on advanced Technology in D'zeron, and because his AI robot Sylvia is permanently linked to his memory implant, He has to have his memory implant removed before leaving the Marrion Jay. The removal of his implant causes him, for about 3 days, to revert to the age when it was implanted, when he was 4 years old. During this time Jason captures a Dragon Ferret [AKA Rat Pigeon] to help him recover. He names it Marrisyl after the two entities Harris misses most, the Marrion Jay ShipCommunity and Sylvia.

Jason and Harris both turn out to be, in different ways, the Heir of Desmond Harris, and they eventually share the burden of being the Center of the empire, until it is returned to Desmond after He is resurrected from the dream plane by Quetz'l and Jonathan.

Harris marries Allissa after the death of Chathalen and before the birth of Allisa and Chthalen's twins, Luke and Laia . 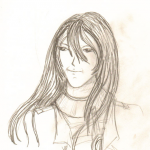