The primary protagonist of the Destiny of Dreams series overall

At the beginning of the Destiny of Dreams series Jason is about 21 years old, working as an Anthropology professor specializing in retro-technology and dreaming, at the Alien Studies department of KSU .

If he lived today he would probably have Asperger syndrome, although in his time such categories no longer exist.

He is very small and short and pale, at 21 appearing to be about 12. He prefers not to wear much clothing, tending to wear sandals and shorts even in the middle of winter, even in the snow. As retro-technologist he enjoys technology from earlier times. He wears round wire framed glasses even though he could easily have his eyesight medically corrected. In person he is shy quiet and fearful, but in performing for a classroom full of students he is quite the showman,

Because he is a successful Author, a respected professor and the son of a very famous artist he has close to unlimited wealth which he does not spend for anything mostly. He is also a tallented artist in many media, Just from having grown up with it, though he rarely choses to indulge in it, except in hanging out with his mother while she works.

He loves climbing trees and rocks and buildings and is very skilled at it, to the point of seeming to defy gravity. He uses this skill to avoid people while avoiding advanced technology, walking to work across the tops of buildings and trees. He does also have an Aircar, however,which he uses sometimes and enjoys flying. It belongs to his mother and they have had it all his life since before he became a retrotechnologist.[it was given to his mother when she painted the History of Paragangia]

He is rather famous within his field of dream studies and Retro-technology, being a prodogy and having published two books chronicling his two field studies on planets where not everyone is allowed to go. HomeWorld LDS colony , where he live for a year when he was 12, with his great grandmother Rae , and Earth Station Mexico /planet Mexico where he spent a year as a teen ager doing field study which was arranged by Jonathan who grew up in the mexican community of Earth Station Mexico . Durring this time he came to know his cousin Carston Hawthorn , and Carston's mentor Waldo, and His adopted Step-grandmother Marisol , who raised Jonathan.

Because of his noteriety and because he is an entertaining lecturer the course he teaches at the university is very popular and thus the Anthropology department head Persington spoils and protects him. right before he is called to go on the journey he is given an assistant named Matthias. He does not initially want Matthias, hating to deal with anyone one-on-one, but soon realized Matthias's job is to do all the one on one interactions with students for him, His avoidance of that was a problem for the department. They quickly become good friends and Matthias is very protective of Jason,

Jason's biological father Desmond Harris died before Jason was born, and Jason's birth certificate was signed by Jonathan Landon, making Jonathan his birth father. Jonathan and Gloria separate shortly after Jason's birth. They are reunited and marry when Jason is about 8 years old although the marriage is never really consumated. Jason knows about Desmond but is very close to Jonathan and considers him completely his father, considering Desmond of little significance. Does not like to be reminded of Desmond in any way.

Jason spent his early childhood by a beach in Florida with his mother Gloria. He loved the ocean and the beach and all the creatures he found there. He had very little intrest or involvement with other people. He educated himself using online resources, finshing Highschool by the time he was about 10. he found Jonathan because he wanted to start college and was interested in Jonathan's dream studies program because he was having lucid dreams.

They move to Kansas after reuniting with Jonathan.

Jason may or may not be a Chosen One of HomeWorld.[as of 2014, he is not but his daughter Emily Scott-Harris is] 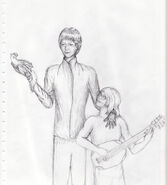 Jason and Harris and Marrisyl on the beach at Kaar-taal--first drawing, to show relative height 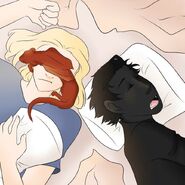 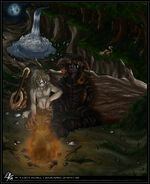 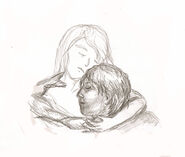 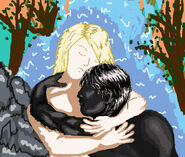 jason before his journey practice sketch

Jason and Harris redo from Storm-artists.net 2011

jason and Harris on Marrion Jay abt 2007

line art of picture of entire family by Rebecca Blackwell 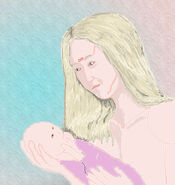 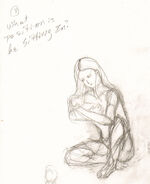 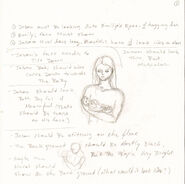 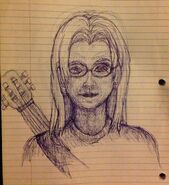 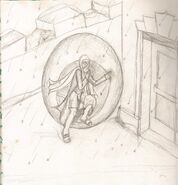