In Destiny of Dreams, Jason's Teaching assistant at KSU.

His role and character in the story:[]

A tall thin young man with dark shaggy spiral-curled hair, Matthias comes from a very poor family in Michigan[which in his time period is a costal state.] His mother is a single parent with many children who also tends to adopt young neighbors and relatives. Matthias's main life experience therefor is interacting with Children and he is very good at it.

Matthias loves fantasy games and stories in any media --books, comics TV movies, video games, role playing games and whatever new gaming and story telling technologies have been created in his time, which is Several generations after the introduction of alien technologies brought by HomeWorld and Paragangia. Before he learned of Jason Scott-Harris Matthias had been attending Community College with the intention of eventually training to become a game designer. He's very good with electronics and related technology.[in the 2013 version, he got a degree from community college which qualified him to work at community centers. in the 2015 version he starts working at the community center when he's 16, so he could be working on the other degree during that time, gradually]

Most of his time was still spent helping his mother take care of the kids, and earning money to help support the family. He also works on the side doing web design and technology repair and such to make money to help support his family. He continues doing this while at KSU.[in 2013 version he worked at a community center both in Michigan and again as soon as he arived in Manhattan] His Mom disowned him for leaving and refuses to talk to him, but he sends her money to help with the family and she does not refuse the money. His mom is probably slightly mentally ill. She has no idea who his father was, but his father apparently had some Paragangian or Proto-Paragangian ancestry, because Matthias has the ability to share dreams, and no one else in his family has it.[in 2013 version he's part Paragangian and part Moonlight oassis. In the 2015 version Sammy also has some latent dreaming ability but because his mother is so afraid of it he suppresses it]

Matthias is [and has been all his life] very skilled at lucid dreaming. One day he stumbles across a book at the library by Jason Scott-Harris and reads it.[in the 2015 version he's also ver interested in retrotechnology when he's younger, and theres an old man who works at the library who mentors him who is friends with Persington] He instantly becomes Jason' biggest fan, spends a year and a half learning everything that is possible to learn about him without being at KSU. He sets up correspondence with Jonathan Landon and Dr Theodeous Persington. They are both open and helpful to him, but are not in the position to invite him to the very competative Dream Studies program. He has learning disabilities, and no way to get them diagnosed, and little time to study, his grades are barely passing in Highschool and in community college. Matthias struggles to complete an undergraduate degree at the community college, and graduates, barely. He applies to the Dream Studies program, but his grades in community college are not good enough to win him admission into KSU, plus he is from out of state and has no way to pay for the graduate school program. His mother is also doing everything in her power to sabotage all his efforts.

He hitchhikes from Michigan and camps out at the Anthropology department seeking admission to the program. He spends all day every day talking to people around campus trying to get them to find a way to admit him. He's a very Charismatic guy, everyone loves him, inexplicably, and wants to help him. Eventually Jonathan and Persington find a way to get him admitted in the Pre-Negotiation track of the Alien Studies program, not in the Dream Studies track, with a graduate assistantship and the assignment to be, basically, a Negotiator for Jason in dealing with his students. He is admitted with the understanding that they will allow him to switch to Dream Studies later if he does well in his graduate level course work and convinces Jason to mentor him in Dream Studies. His admission is conditional for only one semester, so he has to do well.

HIs Relationship with Tazmenae  and her Daughter Sheila constantly gets him in trouble with Jason and Persington, often putting his graduate student status at risk.

eventualy he helps taz overcome the traumas of her past and they get married and have a child. his wife and mother become LDS but I'm not sure if he will also.

He is very clse with his little brother Sammy , whose aftrican american father was a policeman who died in the line of duty when Sammy was very young, so Matthias was a father figure to him.

I believe he was first created as a passing mention in Jason's flashback scene upon arriving at Jai-Ten , waiting for Harris to transport him from the Marrion Jay into the port city. In that scene Jason thinks about Harris as friend [New concept for Jason, since he has always insisted he doesn't have and doesn't need friends because he has Jonathan and Gloria, his family] Realizing Harris is a friend causes Jason to realize His teaching assistant Matthias is also a freind, and to want to send him a message telling him how the journey is going.

Later there was a backstory planned about him, in which there was an older [about 30] female student named Suzanne who wanted to seduce Jason and solicits Matthias's help. She like Matthias is seeking admission to the dream studies program and is a lucid dreamer. This is her way of trying to get Jason to sponsor her, so she's basically competing against Matthias. He doesn't exactly help her, but Matthias and this woman become close friends. Eventually they practice dreaming together. After I wrote the Lynzee's fountain story with a character named Suzanne as the lead character, I changed this student's name to TazMenae Blackburn .

In late Oct 2012, a week before Nanao novel started, I wrote a failrly complete outline for a book about Matthias and Taz. in it's current form it's a bit r-rated in content, SO it might be a chalenge to make it publishable for an LDS author, but I have become somewhat attached to this story and intend to pursue it seriously. the pictures I have added at this time of Matthias with Taz and with children relate to this story. I wrote more on this story in December after Nano until real life left me with no time to write. Taz hating holidays is a big theme in this story.

I had no pictures of Matthias, though I have a clear image of him in mind, so I decided to try to record that image on paper. 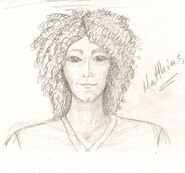 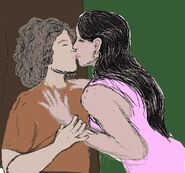 doodles of Matthias and his kids