Ray Valentine was part of the original colaboraton which inspired the avior of HomeWorld story. Although he will probably not appear in person in this story, he left his mark and thus deserves to be mentioned and given credit for the contributions he made.
Ray Valentine belonged to Brokenbiskits from DeviantArt in about 2005, but since that time has been evolved into a different character called Ray Valentyn. What remains of him in my story bears little resemblance to even the Ray from our time of collaboration, as I never understood the character well.

We were not good collaborators in the sense that we had conflicting Ideas and beliefs and couldn't really work together, but we were great colaborators for a short time in that we inspired each other to create within our own different universes. I treasure the memory of that time of creation.Ray was also a fun character to practice drawing so I did several drawings of him through the years.two other characters who will appear in Carston Hawthorn's part of the story were spawned by my attempts to draw Ray.

Ray's adversary Gaia also spawned the character Gaia in this story, though again he bears very little resemblance to the original Gaia of Brokenbiskits.

attempts to draw Ray also inspired a few other characters, notably Lucente, who is a character in the story of San Heath 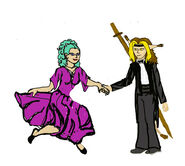 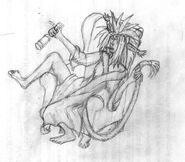 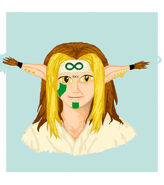