When Matthias first arives in Manhattan KS he goes to the swinmming pool, that bing the easiest place to get a shower when he first arives into town hitchicking. He makes freinds with Sheila and her childcare provider at the pool, and ends up getting a job at her childcare center. They become very close freinds very quickly, because she is looking for a father figure and he understands her and he is missing his family.

Sheila is often one of the reasons Matthias doesn't walk away from Taz, and she tries very hard to keep them together, both for herself and for her mother. SHe loves Matthias as a father figure and thinks he should alwyas be there taking care of them, and doesn't consider this might not always be the healthiest thing for him.

She has curly red hair, is very creative, and  likes bright colors.

based on a child in a short story I wrote arround 2005 called Sheila likes to draw about a girl named Sheila in a kindergarten class who daydreams and draws pictures while she is suposed to be practicing writing the letters of her name.[see unrelated stories  ] 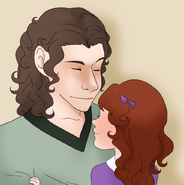 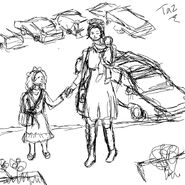